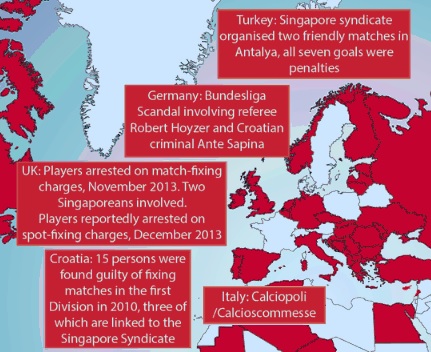 How To Fix A Football Match

Figures produced recently on Asian bookmakers estimate that they turn over $400 billion annually on football markets alone, which eclipses the income of any team being punted on. This figure also makes up 70% of the football betting market worldwide.

Last year, an estimated $15.5 billion of this was brought in on matches that had been fixed in some way or another.

A Brief History of Match-Fixing

Match-fixing has its roots in corruption, which is itself synonymous with greed. In the end, it’s all about the money. There’s basically two main motivations for match-fixing.

Before the involvement of bookmakers, only sporting and political fixes took place. Here are some examples:

You might think that not all scenarios involved direct money being exchanged at the time. That’s true. Clubs can loan out or buy players to settle debts, or can alternatively agree to fix a future cup match or one of next season meetings. Readers of Freakonomics will remember something similar occurring in professional sumo wrestling in Japan, where wrestlers threatened with class demotion (entailing not only a professional but also a social drop in stature where they would have to wait on and clean better wrestlers) would come to an arrangement with another wrestler for whom the bout was a dead rubber.

Mafia syndicates are usually behind matches fixed for the purposes of betting. There are cases where individuals, such as agents, managers, referees, players or groups within certain teams try to manipulate outcomes driven by their own greed. This mostly happens at clubs which have unstable finances, where staff and players have unpaid wages or where the salaries are very low.

The problem is that local mafia knows this and usually target them to propose match-fixing deals. Then the word gets spread and the syndicates quickly become aware of it. It is believed that Camorra and other Mafia syndicates earned $2.6 billion from the 2011-2012 Italian match-fixing scandal known as Calciopoli.

The Art of the Fix

There are many, many scenarios that can be covered here. All of them show how vanity and greed take over, threatening the besmirchment of the sport we love. We’ll try to tackle only a few for now and continue to add more in future posts.

The Confounding Case of the Treacherous Talisman

A case which is currently under investigation involves a team in a minor league. They remarkably agreed to lose matches if their striker was allowed to score goals.

This happened on a regular basis, which eventually boosted the player’s reputation and transfer value. He was then sold to a club in a better league for a much bigger price than he was actually worth. His performances are show only a shadow of the player they saw at his former club.

With betting syndicates in knowledge that a certain player would score in pretty much every game, that his team would lose and that both teams would score, you can be sure that a lot of money was made here.

The Curious Case of the Malevolent Mouthful

There have been many cases of poisoning in the history of football, but let’s talk about a recent case which involved match-fixing.

In 2010, third-divison side Cremonese were 2-0 up at half-time against Paganese. During the second half, all the Cremonese players were noticeably slower, weaker and seemed exhausted. The match finished with no more goals, but the players felt sick and one of them crashed his car on his way home.

The urine samples revealed the fact that they have been drugged with a sedative prescribed for insomnia.

It was later found that Marco Paolini, the Cremonese goalkeeper, agreed to fix a match in order to pay off his debts.

Failing to recruit players to the fix, he desperately decided to poison their water bottles.

The Concerning Case of the Generous Golden Boot

As you might already know, The Raumdeuter has a morbid fascination with Romanian football, the breeding ground for. Romanian players have won the famous European Golden Shoe award 4 times. However, it is believed that only the first of the four is genuine. Some dubious ones include:

Most notably, in the 86-87 season Cămătaru scored 21 goals – almost half of his total 44 – during 7 games in the last month of the season. This gave him the European record for goals in a season.

Georgescu’s remarkable 47 goal record was only beaten in May 2012 after standing for 35 years, when Lionel Messi put 4 past local rivals Espanyol. He reached 50 goals, which of course still stands.

The Catastrophic Case of the Unrefusable Offer

There have been a few cases of mob-related chaps entering dressing rooms with a guns, threatening murder if the fix doesn’t pan out as planned. They have also visited players at their homes, threatening themselves or their families.

In order to provide Live-Betting on offer, bookmakers need live scouts to attend their respective matches. Using a phone, they signal every important event that takes place from kick-off to the end of a match: yellow/red cards, corners, free-kicks, throw-ins, penalties, goals, etc.

The most important part of a live scout’s job is timing. They have to signal dangerous free-kicks, one-on-one chances, red cards, penalties and goals as fast as possible, in order to stop the betting market.

This stage in the process has also been targeted, with live scouts having been compromised by armed goons, intending to capitalise on the delayed feedback.

The Crazy Case of the Ghost Game

What’s easier than finding someone to coerce or grease to influence a result? Inventing a fake fixture, so you can report and bet on whatever you like!

While this might seem like the sort of event that a lazy Hollywood screenwriter would churn out for a summer release, Turkmenistan U21 vs. Maldives U21 on 16/1/12 was a fabrication created entirely by betting syndicates. The match was of course not televised, so the only source of information about the game was provided by people who had been put into position specifically with the intent of treachery. The fact that we’re reporting this story at all is only possible of course because the perpetrators were apprehended, but make sure you remember this tale next time you fancy a punt on an untelevised youth international friendly between two relatively minisucle footballing nations.

We of course don’t advocate the fixing of football games, and this is an article intended to entertain you some of the ridiculous lengths people will go through to make a quick buck. Personally The Raumdeuter finds match-fixing morally deplorable and one of the scourges of the modern game, along with agents and FIFA. Evidently all three are hugely involved in the finance of the game, and that’s something that we will be looking to shine as many lights on as possible through our work. Tweet

We at The Raumdeuter care about football and its future, and we would love for you to either join the contribute to the debate on this subject or simply pass it on to others for them to form an opinion as well. Thanks! Follow @dieRaumdeuter