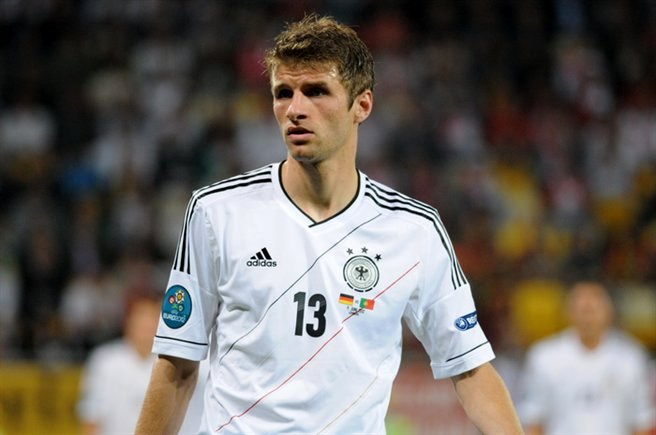 It looks like some clubs just can’t take no for an answer. Despite being snubbed during the summer transfer window, Manchester United continues to doggedly pursue Bayern Munich superstar Thomas Muller. We guess you can’t blame a guy for trying, but the tenacity of Manchester United in Louis Van Gaal’s hounding of Muller is getting to the point where Munich manager Pep Guardiola might want to think about filing a restraining order.

Van Gaal has quite a history with Muller and was the first coach to bring Muller into the first team at Bayern Munich back in 2009. While there’s been some speculation that Muller might not be opposed to a reunion with his old coach, the star has repeatedly stated that he doesn’t plan on going anywhere. However, Muller did credit Van Gaal’s support as vital to his career in getting him to where he is today.

“It was important he had confidence in me on the training ground and on the pitch,” Muller told one source. “And that he helped me to develop at that stage.”

Both Muller and midfielder Bastian Schweinsteiger got their big breaks under the tutelage of Van Gaal while at Bayern Munich and Manchester United has already enlisted the services of the latter. The Red Devils are showing marked improvement in the Premier League this year and currently sit in a comfortable third place following several decisive wins.

The addition of a game-changing attacking player like Muller could be all that sits between Manchester and a league title. This article notes that Muller said he is not surprised by the determination of his former manager.

“If [Van Gaal] is convinced about the quality of a player then he’ll take the risk and try it with that player regardless of what the media or anybody else says. If he is convinced about something he will stick to his guns,” he said.

Bayern is currently having a banner year and sits undefeated at the top of the Bundesliga tables starting their campaign with a league record of nine games undefeated. Muller himself is in fine form and has scored nine times in nine league games, and he has brought his consistency to the Champions League as well. Given his recent form, Muller is a safe bet when it comes to goals and we expect big things from the Raumdeuter in the upcoming matches against Arsenal. Experts at this site are backing Bayern for the victory, with odds listed at 3.10 that the team will be winning at both half time and the end of the match.

Apparently Manchester United haven’t been the only English team frothing at the mouth for the services of Bayern Munich’s talismanic midfielder. According to this post, while everyone was focused on the rejection of the Red Devils, Arsenal was trying to slip in an underhanded bid of their own for the German goalscorer, to no avail. This will surely make things all the more bittersweet for Arsene Wenger and the Gunners when they take on Bayern in their next two Champions League games.