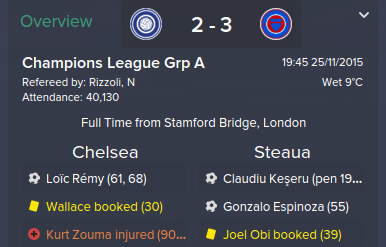 The 2nd season of the Romanian Liga 1 didn’t come without a few surprises, notably the switch from 14 to 18 teams in the top tier causing hectic fixture congestion. March was the worst period, with 7 matches in a crazy 13 day spell, and a total of 11 official fixtures that month. The new playoff system however didn’t stop us from securing the title with 90 points that season!

Part 1 of the article here: Road to Success in FM15: Steaua Bucharest

Finally got rid of Cristian Tanase, Lucian Filip, Luchin and Breeveld for a total of just over €8 million.

I loaned in a couple of decisive and high profile players: Dorin Rotariu from Arsenal for the left wing and Joel Obi from Inter to try him as a left back as well as his normal midfield positions. I also got a pair of central mids on a free: Inigo Perez and Sunday Mba. I paid transfer fees for a few, but other than Joaozinho @ 190k from Braga and Gabriel Torje @ €975k from Udinese all were youths. One in particular stood out from the rest for me: Only included in the first team squad during the playoffs, Jimoh finished the season strongly and scored 6 goals in the 6 games he played.

The fight for the title was still interesting before the playoffs. The good squad depth I’d managed to achieve helped me physically dominate the last part of the season, turning it into a no-contest in the later stage. Again qualifying for the Champions League Group Stages, we gave a better performance this time, as the squad became more attuned to my philosophies.

Got 4 points off Lyon and only 3 from Plzen. But the unexpected result came on Stamford Bridge however: The Hazard brothers couldn’t stop our ambitious squad on this occasion. We were buzzing to see the draw for the next round, although when Atletico Madrid popped out we knew we were in for a difficult tie… Probably the worst time to have a man sent off is during Champions League Knockout Rounds. Mr. Dingert didn’t have too much trouble sending off hardworking Joel Obi in the first half however. The tricky Humam Tariq‘s second goal gave us belief going into the return leg at the Vicente Calderon: Oliver’s late goal sent us home: 3-3 aggregate score but Atletico progresses on away goals. He just came on in the 80th minute to take part in only his 2nd fixture of the season, which proved critical for his team. We felt frustrated, but eager to move on and work even harder to do even better next season!

The list could go on, but I believe it’s enough to point out the performance level of my team. Here’s our best eleven: We now have 8 Nigerians at the club, although only 3 are in the starting XI. Next time around we’re going hard for the Champions League, and after the success of Obi (before his red card) and Rotariu (before his injury) I’ll be looking at high profile loans again as the main transfer target this summer.

This post contais the 2nd season’s summary, but stay tuned because there’s more to come. All the skills and techniques I use to achieve success in Football Manager 2015 are available for you to download.

In the first season we beat Juventus. This time it was Chelsea‘s turn to surrender in front of our ambitious squad. Who will it be next time? Follow @dieRaumdeuter to make sure you find out!