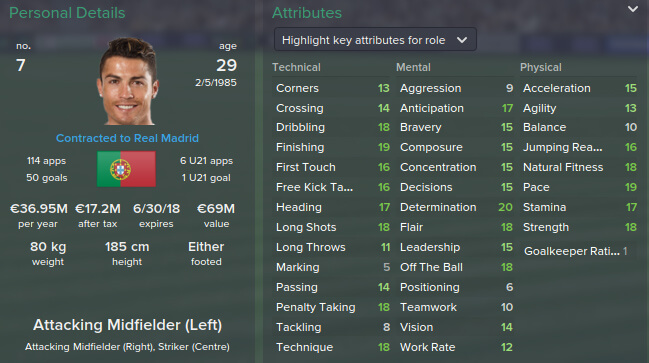 A player who makes a 96 metre run in just 10 seconds in the 78th minute of the Madrid derby should be noted with maximum Stamina and maybe Pace, shouldn’t he? Well, that makes sense from a football scout’s my point of view, although FM scouts seem to weigh things a little different.

*Usain Bolt holds the current 100 metre world record: 9.58 seconds.
I understand his Work Rate being that low he be able won’t cover as much distance per match as Nemanja Matic, but his Stamina should definitely be higher, if not maxed out.

Extracts from the game’s manual (in green):

Vision: This refers to a player’s vision and ability to see a potential opening, not necessarily exploit it. A player might be able to see something to take advantage of but also requires the technical proficiency to pull it off.

14 out of 20… unbelievable. I understand he might be selfish, but that’s actually got to do with the Teamwork attribute: How well the player follows tactical instructions and works for and alongside his team-mates. A team full of players with a high rating here will work better as a unit. Players with lower ratings will slack off and not ‘buy in’ to the team ethos.

But that’s never a problem for Lionel Messi, who’s got the Vision attribute maxed out at 20: Now, I don’t wanna get into all that Blatter stuff right now, but still:

He’s not a bad passer after all, 14 out of 20 seems pretty reasonable to me! Yeah right… After all, fellow Messi got just 19 for only being at the end of Xavi’s passes, so that’s fine!

Off topic: Another funny thing I noticed, Messi got the Heading attribute as high as 12. It must have taken them hours to find analyse all the 3 times he’s ever hit the ball with his head…

Anyway, according to the game scouts Messi is better at mostly everything, even at Corners. Not to mention his First Touch is rated at 20, compared to Cristiano’s 16.

Cristiano’s Agility attribute is 13. Messi, on the other hand, has 20. Agility reflects how well a player can start, stop, and move in different directions at varying levels of speed (pace). It ties in with the Pace, Acceleration and Balance attributes as they work together in the match engine, especially when a player is running with the ball.

With the Free Kicks attribute at 17, they are saying he’s quite decent at it as well:

This isn’t meant to be a Ronaldo v Messi debate. It’s just a comparison within the game to have a better way of presenting a general point of view.

Question for the readers: Is Ronaldo underrated or is just Messi being overpowered?

By the way, still having trouble with FM15? Check out Valex Ferguson’s latest eBook: FM15 – Can’t Win to Champion, and master the game after only one read!