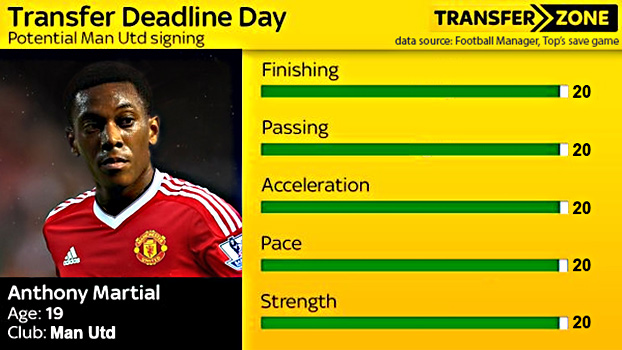 Do you want to find the best wonderkids in FM16? If you arrived here searching for Football Manager 2016 -10, I have to tell you something. There isn’t any player with a -10 potential on FM16. But the good news is that a -95 range value was introduced!

Each player can have either a fixed or variable Potential Ability. The fixed range can have values between 1 and 200, whilst the variable comes in numbers starting from -1 and can go up to -10. Inbetween 8 and 9 for example, we have 8.5, which translates to -85 in FM database terminology.

Now, every time you create a new game on Football Manager 2016, all the players that have a variable Potential Ability will get randomly generated values within the respective range.

To give you an idea about what these numbers can represent if the wonderkids reach their potential, I can tell you that Messi has a Current Ability of 198, Cristiano Ronaldo 192, while Gareth Bale comes short at just 170. (Neymar and Luis Suarez both have 183; Hazard is at 179; knew you’d ask!)

These are all the U23 Players that could reach at least 180 Ability in Football Manager 2016. Sorry guys, but there’s nobody with that Potential Ability in Football Manager 2016. Fortunately, we have a couple of players in the FM16 database that could become as good as Ronaldo: Pogba and Neymar.

Don’t forget to Follow @dieRaumdeuter
to stay updated with the latest posts!