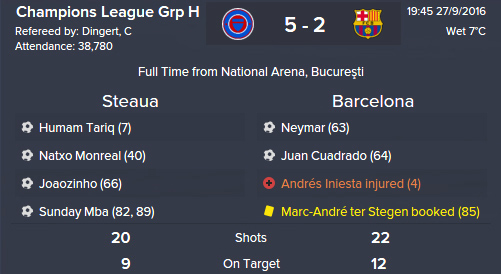 My expectations for the 3rd season were to reach the Champions League Knockout Stages. Without going all in with signings, I was gambling on having a strong squad chemistry, which we did achieve: “the players would die for each other” – extracted from one of my assistant’s reports. It was only natural to feel I might be able to go all the way, so let’s see what happened.

Didn’t have much trouble in the league, only lost the 2nd game of the season after being crowned champions. We’ve also won the Romanian Cup and the League Cup in the process.

Make sure you don’t miss the video at the end of the post!

After loaning out the promising lot and getting rid of the surplus, we decided to grab a few quality loans, only to avoid going over my self-imposed wage cap. Here’s what we got, and how they performed: Having an average of over 8 tackles/game in the Champions League, Natxo Monreal has proved to be the key signing of the season; and other than his defensive duties, he also added 12 assists during this spell at Steaua.

I must admit I felt a bit nervous after the draw, but in the end, we only lost our last match after we were already qualified: Although we lost first place after the last game, the draw was rather kind to us, having to face Leverkusen in the Last 16: After a first leg of mixed fortunes, we didn’t really know what to expect. Although we dominated, we could’ve lost. But the team pulled off a tremendous upset. There was no time to celebrate though, having to face PSG next in the Champions League Quarter Final: Just when I though everything was over, Iancu banged a late double that kept us motivated for the 2nd leg. But all good things must come to an end. After staying in the game for almost an hour, we eventually had to surrender in front of a highly motivated PSG squad. Only Cavani’s salary was about 40% bigger than our whole club’s wage bill. And although money isn’t everything, let’s see it like David losing to Goliath in some round. This season we managed to grab wins against Barcelona, Napoli, Plzen and Leverkusen. Not bad for a squad with a wage budget just shy of €10 million. Our fanbase is growing, the same way our budget is. Training facilities got improved every season and we already bought the stadium. Most of our players are wanted by other clubs, and we’re in very good position to further improve.

All the skills and techniques I use to achieve success in Football Manager 2015 are available for you to download. The 4-4-2 tactic which I created for the match engine update has been even more successful than previous tactic. If you want your players performing like mine don’t hesitate to download the FM15 – Can’t Win to Champion v2 eBook.

Follow @dieRaumdeuter to stay updated with the latest posts!