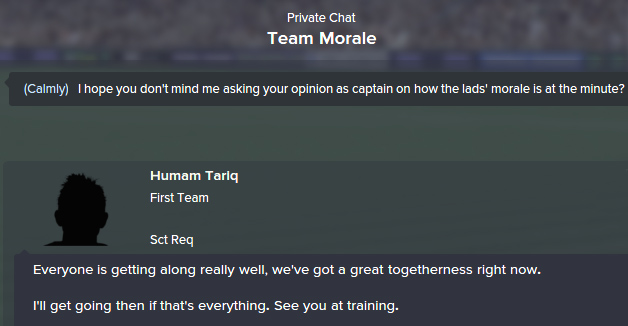 Keeping Your Players Happy In FM15

Football Manager 2015 has brought a significantly increased amount of unhappy players. The complex behaviour of individuals has been implemented to replicate common real life scenarios. It’s basically about the same things that happen all the time in football: agents want better contracts for their clients, less-played squad members want more playing time or just the old annyoing demand of wanting to move to a bigger club.

Players that have an important squad status will be more demanding, therefore you will make them unhappy faster if you don’t give them a lot of playing time.

Try to reduce the number of individuals having Key Player or First Team status, but be cautious. Go only one nudge a time, otherwise you might seriously upset them.

I also want to mention that by having a player’s status as Backup or Not Needed you will encourage other clubs to bid on him.

Plan ahead. You must have your competition squad defined before the transfer season ends. Ideally, you’d want it sketched before the pre-season period. Your whole team could suffer if one of the unneeded players starts to moan.

Sell whoever you don’t plan to use. If you can’t find a buyer, at least look for a loan move. Same goes for youngsters who expect to play whilst you don’t need them at the time. Just find them a temporary move to avoid disrupting your squad’s morale.

Some players which don’t get much playing time will start to complain. Ideally you want them on Rotation or Backup status to avoid it, although it might still emerge, depending on their personality and how much they play.

Private discussions will forge your relationship with the individuals. Try to speak often especially with the less used players. If you’re being objective they will react well, even if it’s to praise or criticise.

With the risk of repeating myself again and again, I will mention that Morale is probably the most important factor in FM15 success. Consider downloading the FM15 – Can’t Win to Champion v2 eBook to improve your chances of becoming a successful manager.

You might want to continue reading this related post: How to maintain a long winning streak in FM15.

Make sure you share this if you found it useful. Follow @dieRaumdeuter to stay updated with further stories.