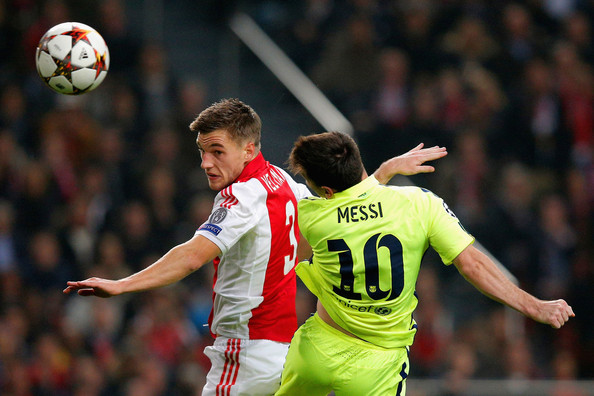 The Eredivisie is of course one of the greatest producers of talent in world football, and it’s no coincidence that all of the best footballers in the world,  with the exception of Sergio Aguero, have been coached by a Dutchman or played in the Dutch top tier at some point.

Has to cover the channels in this formation with attacking wing backs. Ajax, like 18 of the 20 Eredivisie clubs play 433 almost every match and their fluid formation means that he has to carry out jobs that are generally unfamiliar for centre halves.

Excellent first touch
Composed, confident
Pace means they can play a high line.
Marking in anticipation and confidence also mean that Ajax operate with an offside trap at times.

Timing of challenges is excellent, has the innate ability to anticipate the moment when he is going to win the ball, allowing him to shift his weight forward at the same time and counter-attack while cleanly making the tackle.

Very ambidextrous, a defender that can pass and tackle with both feet is invaluable for the options that he provides.

He can show a winger either down the line or inside with the ability to dispossess him on both routes, and can also pass either way, meaning he requires less help when he is on the ball as he can pick out the majority of his teammates from his deep position with either foot, but not without a trick or two.

Defensively only place he can be faulted.
185cm, not massive.

Ajax and De Boer in particular rate him very highly. He’s not just a great fit for Arsenal, but in fact I’d go as far as to say they need him. Liverpool and United would also be massively improved by his presence, but such is his quality and potential most teams in the Champions Legue would be improved with him.