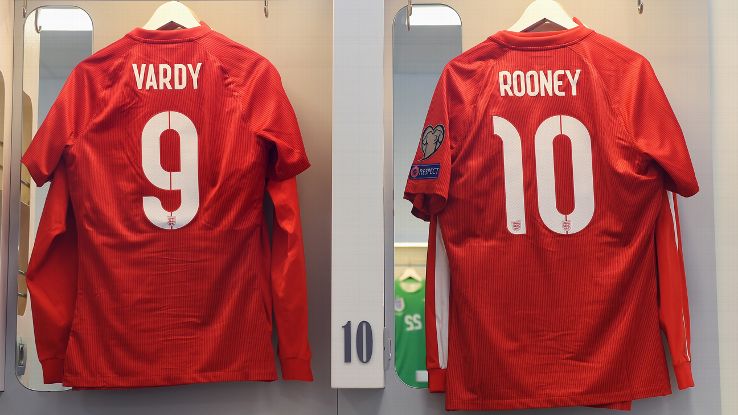 He can run, he can tackle and he can score. Yo don’t see that every day, do you? The English version of Dirk Kuyt comes with less technique, but more pace – in typically English fashion. Let’s take a closer look at the man who has moved his wedding to ensure he is available to play for The Lions at Euro 2016 and decompose his change in fortune with the help of Garry Neville and Football Manager 2016.

How has that decent pacey winger turned into an elite striker overnight? Some say that the England call-up highly boosted his confidence; others believe it was only due to the tactical adjustments made by Claudio Ranieri and to the new role he’s been asigned with this season. Well, the best answer could probably be represented by a combination of the aforementioned arguments.

So, why did it take so long?

This is how this role is described in thee Football Manager 2016 Manual:

The Defensive Forward is becoming more and more important in the game.

His main duty is to put pressure on the defensive line, chase down the man in possession and loose balls and generally stop the opposing defence having any time on the ball. In an attacking sense he keeps things as simple as possible, preferring to bring other players into the game than create his own chances.

This pretty much describes Jamie Vardy. An aggressive runner who never gives defenders time to take a breath and acts as Leicester’s first defender when his team loses the ball. And to be honest, this is what modern football is all about. And by the way, this is my favorite duty for central forwards in Football Manager 2016. I have to admit that Jamie Vardy’s FM16 version is fairly accurate. Even his Preferred Moves are pretty much like what you’d expect them to be. Some might say that his weaker foot is not as poor as it is respresented in the game or that his level of composure is much better in real life, and the list can go on. But all in all, I believe there are only two attributes that do not reflect the player’s capabilities: Agility and Balance. So let’s see what the game manual says:

Agility reflects how well a player can start, stop, and move in different directions at varying levels of speed (pace). It ties in with the Pace, Acceleration and Balance attributes as they work together in the match engine, especially when a player is running with the ball.

Balance reflects simply how well a player can keep his balance in situations both with and without the ball. With the ball, it refers to how balanced he is running with it and evading opponents, without it, it refers to his balance when facing a player running at him, or his stability when turning/jumping.

Now, if you have followed this player or you have at least watched the video from the beggining of this post, you would have realised that he couldn’t have pulled off those actions if he wasn’t excelling at these two aspects. I’m thinking that the game researchers have probably toned these down to avoid disrupting the game’s balance by turning him into an exploit. But despite all that, he’s a very good performer in the game, as he currently is in real life.

You can see the highlighted key attributes for the roles in the screenshot taken from FM16. His mental attributes reflect a very dermined and hard working player that doesen’t avoid getting involved in challenges.

On the offensive side of things, his anticipation combined with his off the ball skills and his exellent level of teamwork indicates that he is fairly clever in the final third.

The player’s physical capabilities, Quickness, Stamina and Strenght are showing us why he is capable of performing very well and efficiently during the full 90 minutes of play.

Gary Neville, Valencia’s freshly appointed Manager wants to inject some Premier League flavour into the club. You can see a few interesting observations he made during the time he was still working for Sky in the video below.

With Valencia’s strikers having only scored 8 goals in the first 14 matches of the La Liga, it is clear to see that the squad needs strenghtening in the attacking area, especially after taking into consideration that their midfield scored more goals than the actual forwards – 10. Valencia has enough financial power to compete in the race to sign the player. But the question is, will Vardy risk a move outside England?

On the other hand, The Blues are trying to emerge from a crisis. Jamie Vardy scored 14 times in this Premier League season, while Chelsea’s whole squad only totals 17 goals. Mourinho is known for asking all his players to do some defensive work. This is why I was surprised to see that he didn’t go for Lacazette this summer. Lyon’s prolific striker is a fairly similar type of player to Vardy, he’s fast, closes down a lot and scores a lot.

But Vardy will probably be cheaper and he’s got Premier League experience, which makes a possible deal much safer for Mourinho, not having to spend a stupid amount of money and avoiding adaptability issues.

However, Vardy’s future remains uncertain, with Ranieri will obviously wanting to hang on to the player untill the summer window, but who knows how Leicester City’s board will react upon receiving a serious offer.