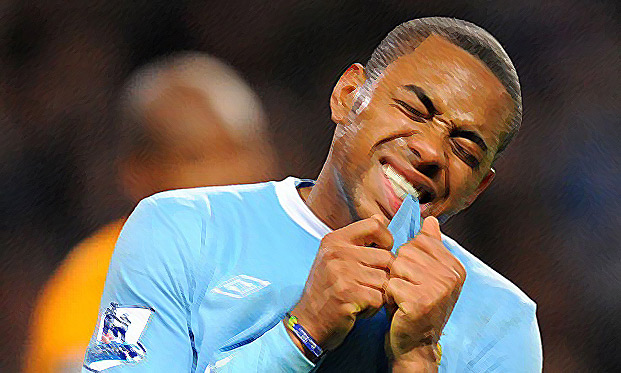 While the number of players CR7 has given a torrid afternoon rivals the number of women he’s given slightly more pleasurable evenings, there is one player in particular who will feel the most anger towards the Portuguese phenomenon.

Robson de Souza, aka Robinho, went from Pele’s heir apparent (a role now taken by Neymar) to being kept out of the Milan team by Adel Taarabt. The most high profile thing he did last year was an heartfelt denial that he had raped an 18 year old student on Youtube.

Where did it all go wrong for the one-time British transfer record holder? For me, the die was cast on 12/8/2003, when Sir Alex Ferguson added to his summer purchases of Eric Djemba-Djemba, David Bellion and Tim Howard with the £12.6m transfer of an 18 year old called Cristiano Ronaldo. Once Upon a Time in London; Sorry, Manchester

There was Robinho attending a press conference. Listen to what he said:

It’s not like he mistaken City for United – that would have been an acceptable mistake. He was only thinking about signing with Felipe Scolari’s Chelsea at the time. This is the truth. After leaving the club he admitted it. But would it have made any difference? Millions could make an individual thing different, but he was going to receive a huge wage anywhere he’d went, or even if he stayed at Real Madrid.

So why did he leave Santiago Bernabeu anyway?

“The club was trying to sign a player (Cristiano Ronaldo) and they didn’t appear to care about me.”

The public interest shown by the club in signing Cristiano Ronaldo was precisely the main the reasons for his departure.

When The Weather Outside is Frightful

Robinho feels that Manchester is an awful place to live in. He found the climate in Manchester unbearable. Let’s have a look:

Now let’s compare that to Madrid:

I’ll leave Robinho to draw the conclusions on this one: “Manchester is a sensational venue for football but an awful place to live … the winter, the cold and the dark nights. It’s very hard for a young Brazilian.”

Latin Americans tend to learn Spanish or Italian much faster than English or German. Some might even sound native after spending severall years in one of those countries. But how many South Americans have you seen speaking a perfect English?

If you can’t understand and express yourself decently in a city you can’t really be happy, unless you’re strongly motivated by something else. This is what Robinho said during an interview soon after his departure:

“The Premier League is one of the best in the world, without a doubt. The stadiums are always full and the atmosphere is incredible, but not every footballer is able to play in England. The character can be difficult for a foreigner.”

“There was a lack of contact between the players and the club. It was much like an office – to training and goodbye, to a match and goodbye. I am Brazilian and I can’t offer my best performance if I’m not happy in every aspect of life.”

“That was my problem. I am a special footballer and I need to be happy when I’m playing. That was the case at Real Madrid but never at City. Perhaps I should never have left Real Madrid.”

For brazilians, football is much more than just a day job. I hope the video speaks for itself:

Adaptability is surely one of the most important factors when considering a transfer deal.

Get a young flamboyant Brazilian International to England or Germany and you’ve killed him. You know the stories about how they party before and after internation games and so on. If they’re not smiling they just won’t play quality football.

Think about Neymar being brought to a Premier League side. I believe the same would have happened.

It now all seems pretty clear and he realised it, but it’s a bit too late: he shouldn’t have left Real Madrid.

I believe he’s enjoying his 4th spell at Santos, of course, only because he is now in a place having the right climate.