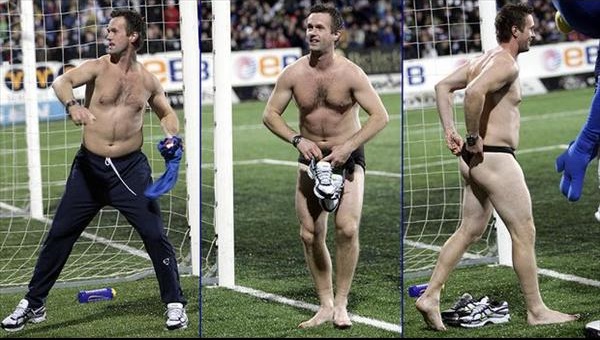 Chelsea visit Strømsgodset, but not for Martin Ødegaard?

Former Godset manager Ronny Delia was working with such limited resources in 2009 that he promised to strip on the pitch if they stayed up. He stayed true to his word.

The news that Chelsea were interested in the low carb diet that Strømsgodset have employed since 2006 came as no surprise to the Raumdeuter, who have been following the development of this progressive club for a few seasons since Oyvind Leonhardsen captained a newly formed squad to Tippeligaen promotion in 2006.

While there have certainly been a few disappointments along the way, since current Celtic manager Ronny Delia took over from his managerial mentor Dag Eliev Fagermo in 2008 the club has seen their second ever league win, their stadium expanded to play in European competition and the emergence of potentially the greatest Norwegian footballer of all-time.

Need any more inspiration to give up chips?

Introduced by Godset dietician Kenn Hallstensen, Delia was on the diet for the last two years of his playing career, and said that he had only positive experiences with simply replacing carbs with proteins and fats. It was reported that in addition to the exciting, attacking football on display while the Scottish giants Celtic were scouting eventual signing Stefan Johansen, Delia’s thoughts on nutrition assisted in securing him the job.

Chelsea have visited Hallenstensen on several occasions to learn from his methods, and other sportsmen such as Novak Djokovic and Morten Gamst Pedersen are known to follow similar regimes.

The gigantic Hungarian striker Peter Kovacs, who Delia played with during those two years is still playing for the Drammen team, and the thirty seven year old pays credit to the nutrition plan for helping to elongate his career.

Kovacs played an influential part in the 2013 title-winning season, Godset’s first top tier success since 1970. The 6’6 target man is back for his second spell at the club and in addition to providing the assist for Martin Ødegaard‘s first professional goal he lead the scoring charts for the club in the 2014 season as well.

Unfortunately, despite improving Marienlyst Stadion from a Category 3 stadium to Category 4 to comply with UEFA regulations for European football, the loss of key players such as the aforementioned Stefan Johansen, top scorer Ola Kamara, Adama Diomande and return of Abdi Ibrahim and Razak Nuhu to Man City were acutely felt, as was goalkeeper Adam Kwarsey Larsen’s departure to the World Cup with Ghana in the summer.

An unlucky tie against Steaua Bucharest, the highest-ranked team in the second round of the Champions League qualification draw, saw a swift elimination follow. Early cup elimination to first division Tromsdalen and a 4th place finish could have lead to Delia’s replacement David Neilsen feeling some heat from the Godset board over the winter, but instead the talk is all of a 15 year old who became the youngest ever Tippeligaen player on the 13th April and hasn’t been out of the headlines since. The youngster however is not on the low carb diet, as he is still developing physically.

Strømsgodset will continue to do things in their own ways, even though the players and coaches will change.

Ødegaard will go on trial to a top European club in January and will move soon afterwards. He has admitted a soft spot for Liverpool, but I feel that he would be better suited to a team that look to control possession more (his ability to turn on the ball and advance his team’s position 20-30 yards in an instant would be perfect for Arsenal for example).

Whatever happens, the next step on his meteoric rise to the very summit of world football is imminent.

He will be replaced quickly, and may already have been in Ivar Fossum, who despite being practically a pensioner compared to Ødegaard at 18 is far less well-known. Fossum is more of a box-to-box player but he will be able to provide a similar level of dynamism and spark from midfield.

Whether Neilsen (who English fans might remember from spells at either Wimbledon and Norwich or a high-footed pre-season challenge on Leeds’ Robert Snodgrass in 2010) remains will be interesting.

Open about his history with gambling addition and match fixing and with a history of crazed violence, the Dane is certainly a character. Despite winning promotion to the Eliteserien with unfancied Nest-Sotra, this is his first shot at the big time, and he only became Delia’s assistant at Godset seven months before getting his chance in the manager’s seat.

Godset have always been a club that trusted in inexperience and innovation through the dark and meagre times however, and in this environment Neilsen could potentially emulate his mentor’s success at Marienlyst Stadion, or even abroad.