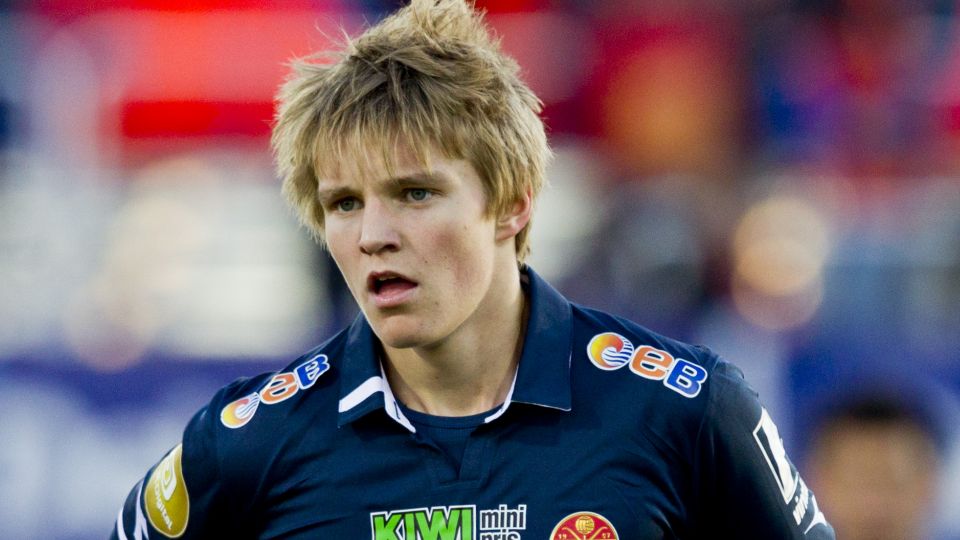 It’s Thursday 17th December 1998. Four months ago a Zinedine Zidane brace in Paris led France to their first ever World Cup title and in a few days B*Witched’s instantly forgettable ‘To You I Belong’ will end the seven week reign of ‘Believe’ – Cher’s all-time pop classic – as UK number one. And in Drammen, a fast-growing city in eastern Norway that is one of the most environmentally-friendly in Europe, 24 year old footballer Hans Erik Ødegaard – an accomplished if unspectacular midfielder for Strømsgodset – is celebrating the birth of his son.

Fifteen years and ten months later, that son is Martin Ødegaard – Norway international and the hottest teenage property in football.

Ødegaard, who like his father before him plays for Strømsgodset in the Norwegian Tippeligaen, came to the world’s attention when he came on as a second half substitute in Norway’s 2-1 victory over Bulgaria in the most recent batch of European Championship qualifiers. In doing so, the attacking midfielder – aged 15 years and 300 days old at the time – smashed the record of youngest player to appear in a European Championship game (held by Iceland’s Sigurdur Jonsson since 1984) by 312 days.

Since then the continent’s media has been abuzz with rumour of where the youngster will choose to take his post-pubescent career.
He has already trained with Manchester United, and has visited Bayern Munich, Stuttgart and Borussia Dortmund while on a tour of Germany, but is also reportedly interesting the big Spanish clubs, as well as Liverpool, of whom Martin and his father are both ardent supporters.
But Ødegaard’s national team coach, Per-Mathias Högmo, has told his young charge not to be over-ambitious, and make a move that is best for his game, not his wallet.

“He has already made his debut with the national team, but also at club level, he will have to take a step forward. He is a special talent, but it is not easy to say what would be the next best move.”

“He has two choices: whether he goes to a mid-range club that helps his development, such as Ajax, or he goes directly to an absolute top club. You can see that most players that take the second route don’t usually succeed.” The Eredivisie has a good record of bringing through young players from Scandinavia and the rest of Northern Europe. As we reported last week, a significant crop of Iceland’s young side have taken their first steps in continental football at clubs like Heerenveen and AZ Alkmaar. And Christian Eriksen, by far the most hyped Danish youngster for some time, refined his game at Ajax before moving to Tottenham last year – a stop-over that has allowed him time to evolve from a bright young thing to a bonafide top-level player.

At the age of 15, what Ødegaard has achieved already in the game is incredible. Though you might have expected his appearance against Bulgaria to have been a token gesture – a taste of the big time to show what could be – it was nothing of the sort. Norway – in with a chance of qualifying for the main tournament in the new format – were locked at 1-1 when he was introduced in the 63rd minute and got the winner ten minutes later. His substitution was a tactical decision to win a must-win game.

Ødegaard has taken to senior football at club level like a duck to water. Since making his debut in April, a month into the Norwegian season, he has seen regular action as his club strive to qualify for the Europa League, currently sitting 4th with just a couple of weeks of the campaign left. In his 13 starts, he has scored five goals, laid on a host of assists with his trickery and is growing into his role with every passing week.

Watching video of Ødegaard is just like watching any of these other pre-teen prodigies that get hyped up by the likes of the Mail upon signing for AC Milan at the age of 9. He waltzes all over the pitch, taking the ball past confused defenders, sometimes two or three times, reluctant to give up the ball, with a few unnecessary step-overs thrown in for good measure.

The difference is that this video is from a fully-professional league. The players he’s flying past aren’t uninterested 14 year olds who will have given up the game in a couple of years when they discover girls and alcohol, they’re twenty-something men, with years of experience and pride at stake.

As fresh-faced as you’d expect, he plays with no fear, trying anything he can think of to take the ball past his man. His approach is Zlatan-esque: a five minute video will have you laughing at some of the moves he comes up with, but it always seems natural, never forced and more often than not constructive.

At the moment he sits in the hole behind the strikers, and uses his two-footed trickery to either hold the ball up to allow his teammates to get into good positions, or his vision to pick out strike partners without a hint of telegraphing. Although he’s only 15, he’s not holding his own in this league, he’s looking really bloody good.

Of course, things will change when he does decide to step up a level. Though the Norwegian league is no slouch, wherever he chooses to go he will meet defenders with better speed of thought and anticipation, less accommodating to his lovely flicks and whirls.

It would be nice to see him go to a Dutch or lesser German side – to not bite off more than he can chew and get some good coaching and regular football before trying his arm at the highest level – and maybe the guidance of his father, a footballer himself who should know how talent grows, will make that more likely – but money talks, as modern football makes ever more clear.

Whatever happens, Martin Ødegaard is definitely one worth keeping your eye on.