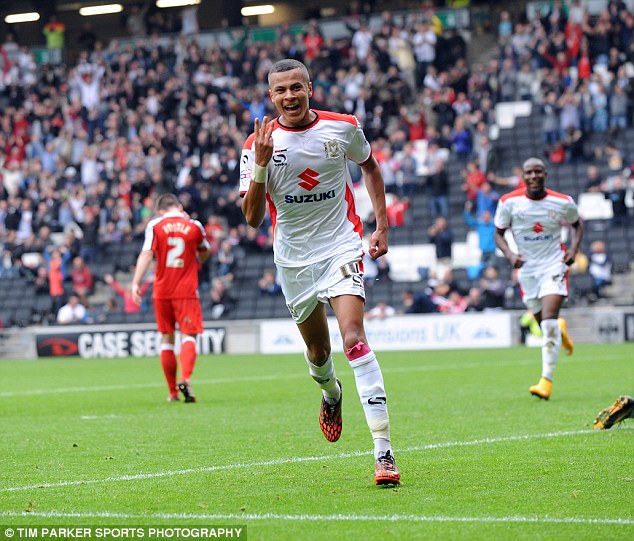 Will Dele Alli finish the season at MK Dons?

Don’t get me wrong, I loved the Crazy Gang. Peter Fear, Oyvind Leonhardsen, John Scales, the list could go on. But they are doing something right up the M1 and in addition to a futureproof stadium and pacey flowing football on the pitch, investment in what is emerging as one of the UK’s best youth academies is something that I can’t hate on as much as I wish I could.

The long-term planning evident in many of the club’s decisions is impressive, and one of the youngest managers in the Football League, Karl Robinson, often puts out teams almost entirely comprised of under 21 year old players. Impressive scouting and a belief in the ability of young players has allowed them to enlist players such as Jake Livermore, Andros Townsend and Patrick Bamford on loan at early stages of their promising careers, and has also given them a consistently good crop of young players to bring through to the first team, and in some instances sell up the leagues.

Adam Chicksen and Sam Baldock (the brother of current MK right back George) are in the Championship with Brighton, and promising centre half/central midfielder Brendan Galloway forced through a move to Everton this summer by requesting a transfer. The crown jewel and overall best player to emerge from the MK Academy however is Dele Alli who has been subject to bids from Premier League clubs prior to and since his debut in November 2012, including a £3.5m bid from the club he supports, Liverpool. Having initially been deployed in several positions across the midfield by Karl Robinson, the 6 foot 2 MK native has found consistency in an energetic playmaking role, and this season reaped the rewards with 6 goals in 10 games, and an assist each of in the ones he hasn’t scored in.

Player of the Month Award

The Football League Player of the Month in August, Alli scored an excellent hat trick this week and notched another assist in their 6-1 demolition of a hapless Crewe. The first, in the third minute, exhibited the powerful tall 18 year old’s awareness to hover on the shoulder of the last man before taking a precise touch to set himself for a controlled finish.

In what turned out to be an absolute non-contest, Alli was the first to console the normally reliable Kyle McFadzean after a freak own goal before atoning for the centre half’s gaff by hanging in the air for an eternity before directing a header down into the bottom corner to reclaim the lead. A precisely executed 60 yard through ball to Benik Afobe for the 4th proved to be only a warm up to the big finish, the completion of Alli’s hatrick. After swapping passes with two teammates on the edge of the area, a left footed fake shot took three Crewe defenders out of the game before a low powerful drive confirmed to all watchers that this boy actually has what it takes to emulate his idol, Steven Gerrard.

Karl Robinson coached at Liverpool and is well-known for having links to the club, and it seems almost inevitable that Dele will eventually get his dream move if he continues to show the talent and enthusiasm for the game which he is currently displaying.

However Brendan Rogers has also shown his faith in two young midfielders from his own youth academy in Jordan Rossiter and Jordan Williams, which could dampen his interest in the England U19 international. Whatever the outcome i s, make sure you give MK Dons a watch this season while Alli is still at the top of his game in a league he is probably too good for.