The statistical revolution has not only been triggered, but introduced to all major clubs in European football. Strange or not, most of the companies and researchers have their roots in American sports. FIFA didn’t archive assists until 1994, but now we’ve got services like Prozone or Opta that are tracking more data than you can imagine! We’ll focus on discussing how all this started and what to expect in the near future.

Do you remember the last few minutes of the Moneyball movie? Oakland’s GM Billy Beane was offered a $12,5 million deal to sign for Boston Red Sox. It was more than a GM in baseball had ever been paid at the time. He turned down that offer. But that’s not really the point though. The chairman, John W. Henry, who made the offer, is the same guy who bought Liverpool back in 2010!

The obviously tried to implement the moneyball concept in football. Why? They immediately installed Damien Comolli as Director of Football. He’s been know for using unconventional metrics trying to discover underrated talents.

Comolli was the first person in European football to contact Moneyball guru Billy Bean. They soon became friends: “The world is so small now and myself and Damien have become close friends. I root for Damien, I root for Liverpool owner John Henry,” Beane said to The Daily Mirror.

In 2010 Opta have come up with a statistical analysis of players’ current form and they found a few intriguing candidates for selection at the time. Here’s the headline from The Guardian which points out the story: 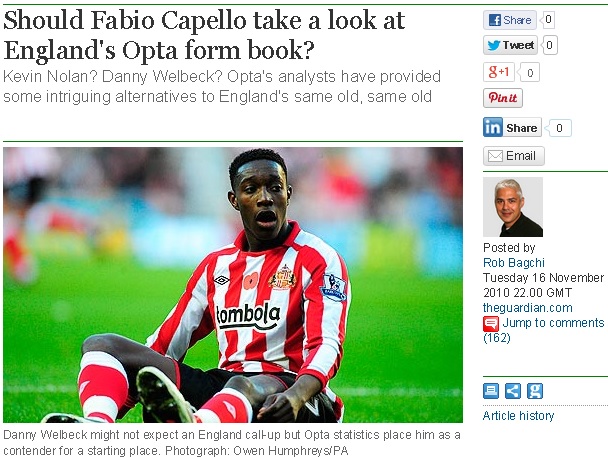 According to their suggestion, Andy Carroll would have taken the No9 shirt with Sunderland’s on-loan Manchester United forward at the time Danny Welbeck as his foil. Full article here.

Now, after a few years, we can better interpret their predictions. It is clear that one of the two suggested didn’t rise to their expectations. However, the other one is currently a NT regular. Any conclusion we can draw from this? Yes, it’s all very vague.

The rise of metrics in football

It is well known that Arsene Wenger receives 60 pages of numbers after every match. Manchester City has 11 people analysing players’data, and every top team has it’s own Performance Analysis Department.

Prozone announced in 2012 that they are serving every Premier League and Championship club. This has caught the attention of many top clubs in Europe, which now follow the same pattern.

The trouble with stats in football

Recent researches show the conclusion that football is a quaint sport that can’t be explained by the numbers. Because the complexity of the game is enormous, stat-tracking companies will always feature a degree of uncertainty.

With our scouting and football experience, we at The Raumdeuter share similar thoughts. The irrelevance that stats carry can be proven with the help of a few examples:

There are loads more issues currently regardind sports data. I could spot many more relevant and valuable info about a player by watching a few live games and doing some local research.

I only believe performance data will be able to replace football scouts when the players will be robots.