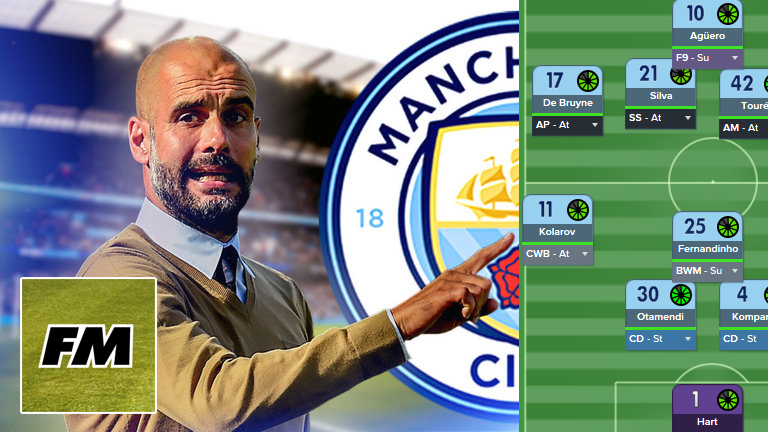 Looking for the best Pep Guardiola Manchester City tactics for Football Manager 2016 & 2017? Great! Cause I’ve put together one that’s slightly better than his!

James Ducker accurately noted in The Telegraph that Man City’s “formation was invariably a sort of 2-3-4-1 but became a 2-3-2-3 at times,” and I’ve basically reshaped my previous variant of the tactic around that – and the results were spectacular! By using this tactic your team will have a higher possesion of the the ball. The fully fluid philosophy ensures that all your players will get involved in the attacking phase (including the centre-back and even the goalie).

The charging full-backs will provide width as they will often open space whilst overlapping. The defensive midfielder will act as a pivot – he’s going to have to put up with lots of rough challenges.

All the attacking midfielders will get several chances to score, so make sure you place your best finishers there. On the left flank you need an Inside Forward, whilst on the right, you’ll need a fast winger that can cross.

The lone striker will act as a False9 – he will drop deep in order to create space for the others to move into channels. Although I’ve tweaked this tactic throughout the save, you can see that it’s capable of achieving pretty decent results…

The good thing about this tactic is that it works both home – in the Premier League: and away – in the Champions League, against the likes of FC Bayern Munich… But despite that I strongly recommend that you alternate tactics throught the season – otherwise you won’t be able to maintain a long positive run.

Note: if you want to play like Guardiola and obtain a ridiculously higher possesion reduce the Mentality and Tempo by one nudge (but expect to generate less goal scoring chances).

See it at work

Download the tactic (.zip file) via e-mail and start playing straight away:

Don’t forget to tell us how it went!