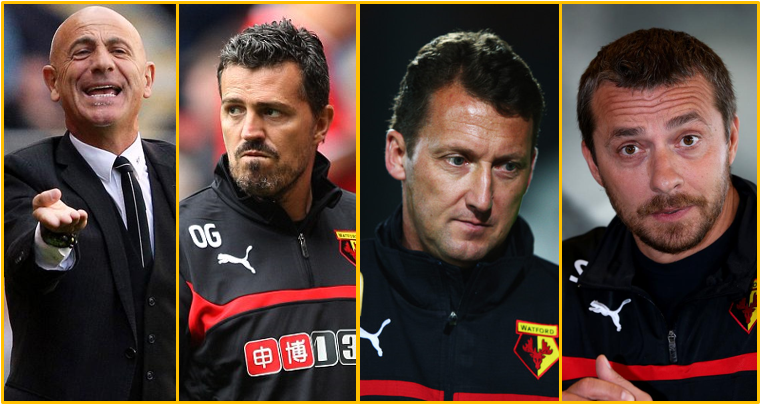 What’s Going On At Watford? – Management Upheaval and Foreign Ownership

The Championship season is now two months old and the contenders for promotion from the famously turbulent division are starting to present themselves. Amongst them is Watford, a side gaining admirers despite going through an extraordinary period that saw them have four different head coaches in the space of 37 days.

That’s not all that’s odd about Watford, so to find out more about how the club works and they’ve become one of the leading clubs in the division, we talked to Ed Perchard from the Hornets blog ‘In The Wolf’s Mouth’:

Tell us about the whole management situation at Watford…

Well it started when Beppe Sannino was shown the door at the end of August. The official reasoning was that his methods didn’t coincide with the ideals of the Pozzos – too much emphasis on tactics, not enough on fitness, apparently. As he had taken us to third in the league and was a guy who wore his heart on his sleeve this was a shame, but there had been rumblings of fights with players and other staff behind the scenes and some public criticism from the likes of Lloyd Dyer, so it wasn’t much of a shock.

Oscar Garcia, his successor who had had success with Maccabi Tel Aviv and had taken Brighton to the playoffs last season, had to resign after a few weeks due to health problems. He’d been in hospital with chest pains and was told to take it easy for a while, so his departure was fairly unavoidable. Apparently his health problems were kept hidden from the Watford hierarchy, who might otherwise have reconsidered his appointment.

It’s what happened after that that caused all the uproar. The club simply made a rash decision by appointing his assistant Billy McKinley to replace Garcia. McKinley, normally associated with youth team coaching, had only just arrived at the club as one of Garcia’s assistant, and gave up his part-time role coaching Northern Ireland when he got the gig. When it became clear however after a few days that Billy had glaring managerial deficiencies, and also wouldn’t be able to incorporate the sorts of innovative sports science based training methods that the Pozzos are fans of, the powers that be decided that they had made a mistake and sacked him. That was the low point, as it was basically a rubbish thing to do to another human being, especially one in his first head coaching job; but they thought it better to rip the plaster off to avoid the pain of replacing him at a more critical time down the road.

So now we have Slavisa Jokanovic ‘in charge’. He won two consecutive Serbian doubles coaching Partizan Belgrade and has also had some success coaching in Thailand. The early signs are good: we’ve only lost one of the five games since he turned up, and he speaks very well and lucidly to the press.

It’s all been a bit of a mess, but due to the changes at the club recently, it hasn’t had a huge impact on results on the pitch.

You say Watford have changed a lot recently, how did it all start?

In the summer of 2012 the club was in a pretty dire situation. Our owner, Laurence Bassini, was a pretty dubious sort: he had recently been stopped from breaking into the club safe by an employee and there were all sorts of rumours about his financial misdealings – the fact he’d changed his name a few years prior due to going bankrupt didn’t help. On the pitch Sean Dyche was doing his best with a rag-tag bunch of journeymen recruited for pittance but as a club we were constantly watching our feet to avoid the precarious drop that constantly threatened us.

That summer however, the Pozzo family – the owners of Udinese and Granada – stepped in and bought the club from Bassini. The power of the day-to-day running of the club was given to Gianluca Nani and Scott Duxbury – both formerly of West Ham, and they in turn appointed their old Hammers head coach Gianfranco Zola to replace Dyche.

And how has all that changed how the club operates?

The Pozzo model, one which they have employed successfully at both Udinese and Granada, is to grow clubs sustainably. They clearly have ambition, as can be seen from the success of their other clubs, both historically small clubs playing – and in Udinese’s case thriving – in their respective top flights, but they’re all about gradual growth.

When you look at some of the other owners around, who are willing to throw money at a football club for a few years of success before jumping ship, leaving a massive wage bill and numerous other unpayable costs in their wake, this is a refreshing approach.

Since they arrived, the Pozzos have built a fourth stand at Vicarage Road, ending a decade of the condemned shell of the old East Stand providing away fans with an easy target for derision, and have even managed to turn a profit for the last two years. Even if the team hadn’t improved over the two years in between, this knowledge that the club’s existence is no longer in doubt would be enough for most fans.

And what about the playing side of things?

The real revolution has been in the playing staff. Udinese have risen from Serie B to establish themselves as regular European qualifiers in Italy by employing a huge network of scouts to scour the world for young talent. Through this they have unearthed some of the best South American players before the biggest clubs have managed to get their hands of them: Alexis Sanchez, Mauricio Isla, Juan Cuadrado and Cristian Zapata were all plucked from domestic football by Udinese. This recruitment philosophy means that they not only get the services of young world-class talent, but also that when the big European clubs do wake up to their talent they are able to sell them on for a huge profit. The Zebrette paid €3 million to Chilean side Cobreloa for a 17 year old Sanchez in 2006; five years later Barcelona were shelling out €26 million to take him off their hands.

Now Watford have been taken into this network. We may not be seeing players that are destined for Madrid or Barcelona, but it is talent that we wouldn’t have been privy to before the Pozzos came along.

We’ve always been a selling club. A player would progress through our academy, play well for a year, and be taken by the circling vultures who knew that we simply couldn’t afford to turn down any sizable offer. But now, we don’t have to sell. The players will go up in value, but until we deem them to have reached their peak, there’s no pressure to let them go. The asset has stayed the same, but now some of the power has been shifted into Watford’s hands – and that makes all the difference.

The Pozzos know that the transfer market in England is hugely inflated – try explaining £11 million for Ross McCormack to an Italian – but they also know that promotion to the Premier League can provide untold riches. So the players given to us may well provide them with another transfer pay day, but with the fortunes of Italian football ever decreasing, it’s a place in the top flight they’re really after.

The majority of the successes that have been sent over to Watford from the massive Udinese pool have been from Eastern Europe. Different players thrive in different footballing cultures, and while Latin Americans may be more at home in Italian or Spanish football, those from more hardy footballing stock suit the Championship better. Having Watford at their disposal means that Udinese have an outlet for this talent that doesn’t flourish in their own league. The immediate success of Matej Vydra, who after one year in England was being linked with an eight-figure move to the Milans and Spurs of this world, is a shining example of this. Hungary’s Daniel Tozser is a mainstay in Watford’s midfield

So what current players would you say to look out for?

Vydra’s back at the club after a disappointing loan to West Brom and is getting back to his old form. Troy Deeney, as I’m sure everyone knows, is an old-fashioned English centre forward with a real eye for goal. He signed a new contract this summer which allegedly increased his weekly wage to between 30 and 40 grand a week, but will go for big money and a bigger pay packet sooner or later.

But the player that’s really the driving force behind our current good form is Daniel Tözser, a deep-lying central midfielder from Hungary. His range of passing is amazing, and on the ball he is coolness personified. If you let him, he’ll sit in the hole in front of the back four and spend 90 minutes spraying balls all over the pitch. His form has earned him a recall to the Hungarian side after three years out of the squad. He’s 29, so no spring chicken, but is a player I think you’ll have heard a lot more about in a couple of years.

But there must be some issues? Has the identity of Watford as a family club not taken a hit?

There have definitely been problems, and the last two years has by no means been a bed of roses, but when is it in football? The way the Pozzos structure their clubs takes the emphasis away from the manager and onto the system as a whole. This in theory makes the Head Coach more replaceable. The massive management upheaval last month rankled with the fans obviously, but I’m not sure it had a massive impact on the club.

In the past we would have referred to the Boothroyd Era or the Mackay Era – but now we are definitely in the Pozzo Era. Coaches come and go (obviously more often than we would like at the moment), but the club runs exactly the same, so despite all of the coaching upheaval, fortunes on the pitch have been consistent throughout.

Of course there have been hiccups, but the club still does its best to maintain the community vibe. They run events in the community, run countless promotions throughout the season, and regularly hold forums to allow fans to quiz the management. And despite the high turnover of staff and players, the majority seem to get the club’s ethos and buy into it. After our dramatic win against Leicester in the playoffs a couple of seasons ago, Vydra, Fernando Forestieri and Cristian Battocchio could be found pulling pints in the town centre, completely spontaneously. The current squad is a particularly popular one – though that may be because they’re winning.

Everything’s looking good for this season then?

At the moment. We started off well last season too, but died away completely due to a run of terrible winter form, so nobody is counting their chickens. But we know that there is a lot of talent in the squad, and that the Pozzos are determined that this is the year we finally go up. Jokanovic, head coach number four for the season, has lasted a month now so can already be counted a success! He’s got us playing a nifty 4-3-2-1 that allows us to utilise our three most potent attacking threats – Deeney, Forestieri and Vydra – at once, but as with any club, we have our jenga pieces, and significant injuries to any of the above, Tözser or Almen Abdi may mean the whole promotion tower comes crashing down.